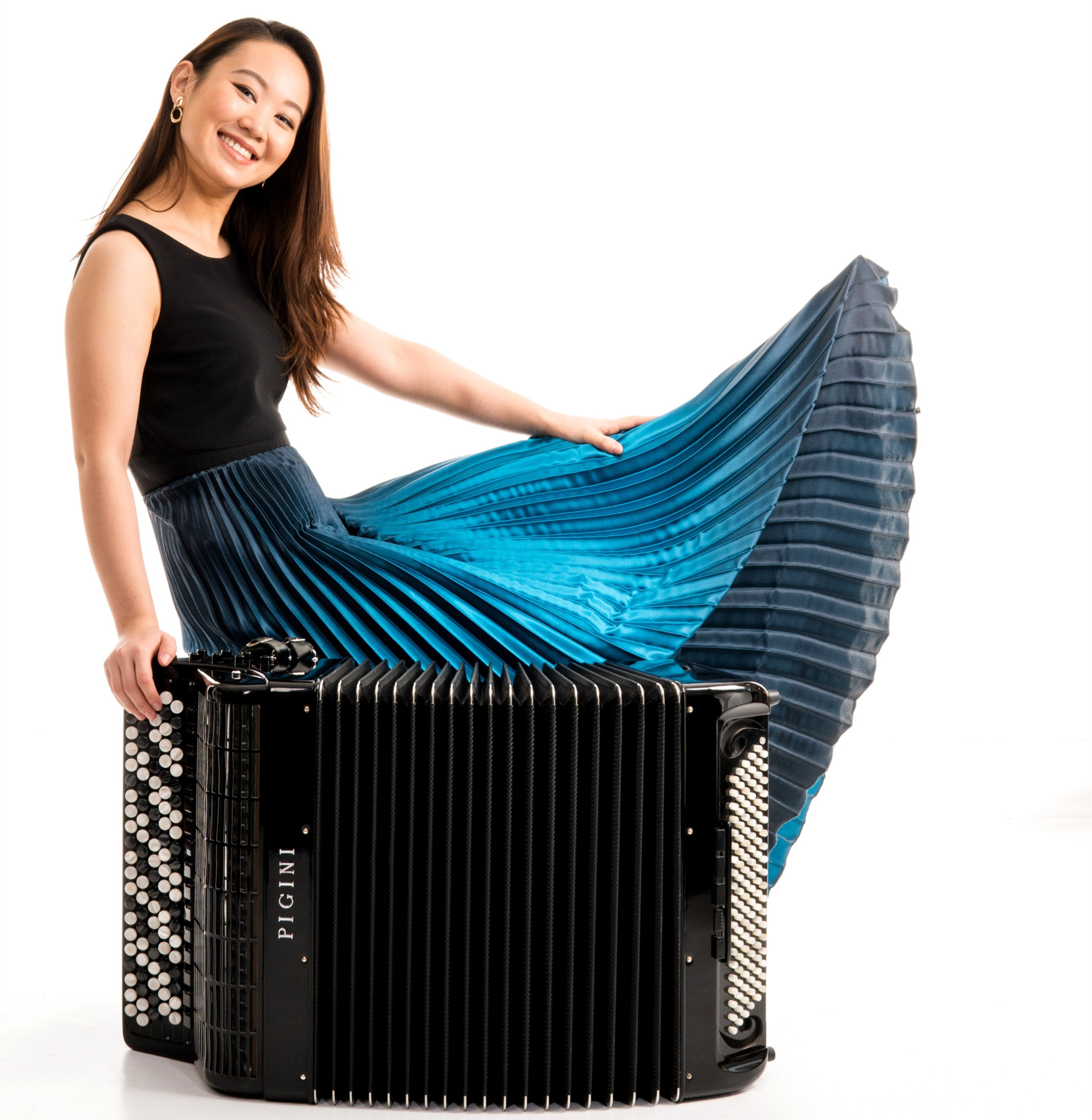 WASHINGTON. I always thought I was pretty familiar with accordion music. Of Polish ancestry and growing up in the Pan-Slavic paradise of Cleveland, Ohio, I knew that accordions meant polkas, parties and fun. Last Thursday, however, a nearly full house at the Kennedy Center Terrace Theater – including this critic – learned something different from an unusual Young Concert Artist (YCA) recitalist Hanzhi Wang. She is a classical accordion performer.

Ms. Wang's appearance at the Terrace in this opening recital of YCA's 2018-2019 Washington season was co-presented with Washington Performing Arts (WPA). In this, her DC debut, Ms. Wang dazzled all in attendance with her skills, her musicianship. She also offered the audience a surprisingly daring and eclectic repertoire in this (mostly) solo program.

“Praised for her captivating stage presence and performances that are technically and musically masterful, Hanzhi Wang is the first accordionist to win a place on the roster of Young Concert Artists in its 58-year history.”

Hanzhi Wang presented a program designed to acclimate the audience to what an accordion could really do in a world considerably beyond jovial, familiar polkas. In so doing, she explored a wide range of classical repertoire so masterfully that it seemed as if these works had actually been written for the accordion in the first place.

This isn't as crazy as it seems. Examine a real, professional accordion. You can easily see that, for all its many buttons, it's really another keyboard instrument. Actually, it effectively has two keyboards.

In addition, the accordion is similar, in its own unique way, to the harpsichord, the piano, the church organ and today's various electronic keyboards adopted by various pop music ensembles. Except that the modern concert accordion is portable and doesn't require you to plug it in. You can lug it around and make music on the go with no need of an electronic tether.

And yet as a portable keyboard instrument, there's no reason why a soloist can't use it to explore, adopt and adapt a sizeable chunk of the classical repertoire. That's particularly true when it comes to the vast treasure trove of piano and organ works composed over the centuries.

Bach at the beginning

Consequently, it might have been for that very reason that Hanzhi Wang chose to open her recital with  J.S. Bach's “Partita No. 2 in C-minor,” BWV 826. It seemed an appropriate choice, coming as it does at the beginning of a more contemporary approach to keyboard mastery. As a result, for many keyboard artists a mastery of Bach's enjoyably inventive, difficult, yet highly precise keyboard works is an important element in developing skills and techniques critical for expanding to other musical eras.

Closing your eyes and listening carefully as Ms. Wang played the six distinct, dance-like movements of Bach's Partita on her accordion. One could easily imagine that you were hearing this music performed on a small, Baroque foot-pedal pumped organ.

Ms. Wang's rendition of the Bach was perfectly matched to disciplined Baroque keyboard techniques. Every note, no matter how rapidly played, remained clean.

And now for something completely different

In an abrupt shift of repertoire, Ms. Wang's next offering was “De Profundis,” composed specifically for the accordion by Russian-Tatar composer Sofia Gubaidulina (b. 1931). Ms. Gubaidulina is what you might generally regard as a “modernist” composer, meaning that her music is complicated, not generally tonal, and thus, often hard to grasp. This got her in trouble for many years with the Soviet government at the time, but she persisted.

Ms. Gubaidulina composed the current work as a collaboration with another maverick, avant-garde Russian classical accordionist Friedrich Lips (b. 1948). The latter likes to explore new and unconventional tones and effects that could be coaxed out of his instrument. That's certainly embodied in Ms. Gubaidulina's piece.

“De Profundis” references the famous psalm, beginning “Out of the depths I cry to you, O Lord.” And it certainly does plumb those awful depths. The composition generally accomplishes this with a variety of scraping, screeching, dragging, sighing and trilling sounds that may very well emanate from a depressingly spiritual Slough of Despond.

Yet that's undoubtedly why Ms. Wang positioned it after the Bach on her program. Above all, it enables her to demonstrate to the audience an astonishing number of “special effects” the modern concert accordion can express. Sounds like those we just cited above and even more, as this clip from the UK's Gramophone points out in its comments on this piece.

“De Profundis” is tough listening. But by programming it, Ms. Wang informs her audience that the classical accordionist can create his or her own unique, accordion version of John Cage, prepared piano-style experimentalism on this instrument.

( Here's a YouTube video of Ms. Wang playing this piece. Travel at your own risk!)

Ms. Wang closed out the first half of her program with a more delightful and decidedly intriguing experimental piece by non other than Wolfgang Amadeus Mozart. His “Andante in F major,” K. 616, composed for an eccentric minor noble and inventor, Count Deym.

The Count had invented and built a clock-like memorial piece that contained a small, internal organ with wooden pipes. Consequently, on the hour, the piece was supposed to awaken the organ and automatically play one or more funeral pieces commemorating the life of a then-famous war hero. So, would Mozart accept the commission?

Of course he would, though he detested the sideshow circumstances. But Mozart had a family to support, and this most immortal of composers was always short of money in his short lifetime. The Andante is one of three pieces that were the result  of his efforts. Not surprisingly, given the small, unique, wooden instrument for which it was composed, this charming movement sounded as if it had been written for Ms. Wang's accordion from the start.

Mozart may have considered this composition to be hackwork. But with Mozart, even hackwork sounded better than anything his competitors had to offer. Recognizing this, Ms. Wang brought the audience back to a recognizable earth with her light, playful, yet thoughtful interpretation of this novelty piece.

After the intermission, Hanzhi Wang returned accompanied by the Omer Quartet: Violinists Mason Yu and Erica Tursi, Violist Jinsun Hong, and Cellist Alex Cox. Together they performed the most robust work of the evening, three selections from “Five Tango Sensations.” All were written by the late Argentinian composer, Astor Piazzolla (1921-1922).

Titled “Anxiety,” “Awake,” and “Fear,” each relatively short piece offers decidedly original takes that are more like meditations on the tango form rather than genuinely dance-able tangos. Combining tradition, modernism, and his own quizzical, exploratory touches, the composer creates in these three works tunes, patterns and sounds that emanate from the Latin American dance floor yet also float far beyond that environment.

At times fund, at times melancholy, and at other times ominous, these selections provide us with an interesting insight into the mind of an excellent composer who's not too well known in the U.S. despite the fact that he spent a fair amount of time in this country, and hobnobbed extensively with well-known musicians, composers and teachers.

The Omer Quartet, along with Ms. Wang, were made to interpret and express all the complexities in this piece. The deep, modern, yet romantic sound that resulted made this ensemble radiate the atmospherics we'd more likely associate with a classical piano quintet. As a result, “Five Tango Sensations” was the real surprise of the evening, a genuine find and a genuine delight.

(BTW, the Omer Quartet will appear in their own program in the second half of the YCA season in 2019.)

Ms. Wang concluded her program with three pieces by contemporary Danish composer Martin Lohse (b. 1971), and an adaptation of “Étincelles,” Op. 36, No. 6, originally a piano piece by Polish composer Moritz Moszkowski (1854-1925).

As Ms. Wang currently lives in Copenhagen, she is friends with many artists and musicians, among them Mr. Lohse. Ms. Wang performed three short pieces by this composer: “Encircled,” “Menuetto” and “Passing III.” The first of these was written especially for the artist, and she read a dedicatory poem by the composer intended as a preface before she began to play.

Each of these three pieces by Mr. Lohse join Danish folksong-like elements with a subdued minimalist undercurrent. The composer first introduces each element. Then he repeats it again and again. But not insistently, and not without significant and inventive development. That's what keeps things interesting.

Many of our younger composers today seek re-entry into musical tradition by tossing aside the 20thcentury's weird fascination with the relentless atonal dogma preached for decades by academic musicians worldwide. As a result, they are reclaiming our nearly lost Western musical heritage while still putting their own individualistic and developmental stamps on their compositions.

Mr. Lohse appears to be one of them. And in Ms. Wang, this composer could not have found a more elegant collaborator. She painted each of them as miniature portraits of a moment or a mood, ranging from the very personal “Encircled,” through the strangely slow and moody “Menuetto” and on through “Passing III,” which, Ives-like, finds many passages crossing one another as if trains passing in the night.

A confection by Moritz Moszkowski

Moszkowski's “Étincelles” concluded this recital. Its title, roughly translated from the French, means “Sparks.”  It is a sprightly piece that sings, dances and runs about madly at time. Its effect is like a small ensemble of 4th of July sparklers, punctuated by the occasional “lady finger” firecracker. Ms. Wang jauntily explored the uplifting, light-hearted cleverness of this piece and easily conquered it challenges, bringing a bright, positive conclusion to a genuinely eye-opening evening.

An enthusiastic audience demanded more, and Ms. Wang graciously returned for a single encore. She announced it was a waltz, although I did not catch the composer's name. Once again, a tuneful, sometimes enigmatic piece, it often managed to sound very unlike a waltz. But, as Frank Zappa once said, Ms. Wang's encore “put the eyebrows” on her recital, bringing this evening to a most satisfying close.

A brilliant career lies ahead for Hanzhi Wang

Only in her late 20s, Hanzhi Wang is undoubtedly well on her way to a unique career in which she has few competitors. At least at the moment. Her first Naxos CD, a Denmark-centric offering entitled “On the Path to H.C. Andersen,” recently went on sale, and her recital and concert dates are booked well into the future. It was good to see her early in a career that is certain to by much discussed and extensively recorded and/or streamed. We wish her well on her journey.

And once again, we have to commend YCA for its continuing, uncanny ability to discover and showcase a most astonishing parade of musicians, many of whom will become the classical stars of the future.

Finally, we conclude our review with another YouTube video, an MTV-style music video featuring the artist performing Edvard Grieg's fluttery “Butterflies” quite brightly and effectively on her accordion.